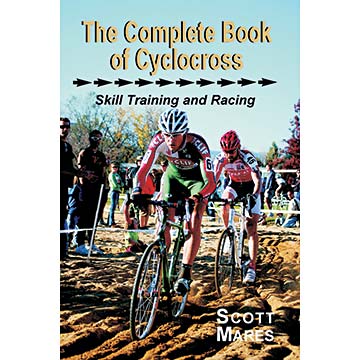 Take your cross skills to the next level with The Complete Book of Cyclocross, Skill Training and Racing by Scott Mares. Featuring numerous well-illustrated drills, this cyclo tome can help beginners start racing and help experts shave those final few seconds per lap. It will also improve other often overlooked aspects of the sport including core strengthening, race tactics and mental training. Black and white, 143 pages.

If I told you that you could gain one minute in a race with the same engine and a little skill practice you would probably think I was crazy. Well, this next section will show you how to do

just that. Let’s say you have an identical twin with an identical VO2 max (aerobic capacity) and LT (Lactate Threshold). You go to a cyclocross skill camp, but your twin does not. When you are there, you learn how to get on and off your bike efficiently and you continue to practice on a weekly basis after camp is over. Now let’s say that all that hard work and practice has gotten you only one second faster though the barriers than your identical twin. If the race is ten laps long and has four barrier sections, after five laps you would be 20 seconds ahead of your twin. If we take into account fatigue and some mistakes your twin will make during the latter half of the race, you are probably now two seconds faster through the barriers than your twin. So, if my calculations are correct (and they should be after going through the first grade twice), in the final five laps you gain 40 seconds in addition to the 20 seconds you gained in the first half of the race.

This means you would beat your identical twin by one whole minute. Go back through the results of your previous cyclocross races and see how close you were to your competition at the end. After some correct practice, you should be close to closing that margin on your competition. Being efficient on and off the bike can make a vast difference over the course of a race. A rider that is trying to stay with you though the barriers will most likely lose time or crash if they are not as efficient in dismounting and remounting as you are. That pressure will cause them to make a mistake and lose large amounts of time. If they back off, they will have to make extra efforts to catch back up to you, which will most likely result in them blowing up too soon. Smooth, controlled and efficient techniques will allow you put all of your energy into going forward.